It has been a while since I posted a blog - in fact, an embarrassingly long time.  Life intervened, and kept my focus elsewhere.  The photography has been there, but the energy to write about it in an expressive way has been absent.  Now, that energy has returned, and I am capturing it and moving forward, much as one might capture a particular image, and then advance.

The photo illustrating this blog is an example of just such a moment. It was shot in Yolo County, on a ranch opened to artists for one day, as part of Yolo County's marvelous program, Yolo Arts and Ag. To be honest, I didn't see much potential when I arrived at this particular location.  Bales of hay, some paint-faded buildings, a stand of olive trees and a few animals.

But I walked around the corner of a barn - a shed, really - and there stood this horse. His presence caught me completely by surprise. I lifted the camera, took the shot as I saw it at first instant, and then paused to reflect for a moment. Shutter speed, aperture, depth of field, white balance, ISO, composition, best angle of the sun - all these thoughts began running through my head. What were the opportunities presented here?

As fleeting as those thoughts were, they still took too long.  In that bare scrape of a moment, the horse withdrew back into the shadows, the opportunity was gone, and I had exactly one image.  Would it be anything at all worthwhile?  I would only know when I looked at it back in my digital lab.

Indeed, in my opinion, there is something there.  A zen horse, balanced against theshadows, in a mask that is interpreted in many ways. The simple fact is it is a flymask to protect him from bothersome insects. He can see perfectly well. But viewers see this mask in many ways. 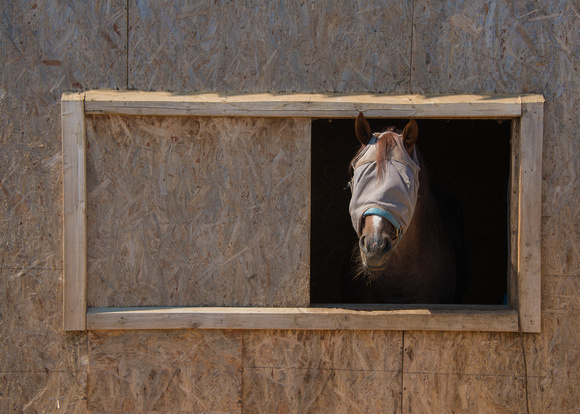 Quiet as he is, this horse speaks volumes to some people. He has been on exhibit a few times, and he evokes reaction. For me, this spells success.  And it is the way of photography that this success, a powerful image, came out of a fleeting capture that was unplanned and almost instinctual.

Writing about him today was also unplanned, and almost instinctual.  But it feels right, and so I look forward to the next story I will have to tell, and to creating another image which will also speak to those who see it.